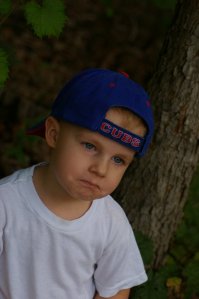 …A lovely post here at the Rabbit Room about baseball.

Like life, for most of the time you’re at the game, nothing much exciting going on. But then for about every 2 1/2 hours of not much happening, you get about 5 good minutes of exhilarating excitement. And to the baseball fan, we knew this coming in, and that five good minutes makes the other 2 1/2 hours well worth it.

…the picture above wasn’t meant to be a statement on the Cubs; it’s what happened when I tried to get Jonathan to stop doing a cheesy fake smile. I said, “just close your mouth,” and that’s what happened. Depending on the day, he could look like he has his game face on or that he’s saying, “wait ’til next year.”

…I will always be a Red Sox fan, but something in me really wanted the Cubs to make it all the way this year. After the White Sox and the Red Sox, it was their turn. It was the century mark. And the eleven-year-old boy inside of my husband was remembering days of watching the Cubs on WGN after school before they added the lights at Wrigley. A little part of me doesn’t want to see my team succeed and his fail one more time. However, anything is better than watching the two teams go head-to-head in the World Series.

…I was sad to see Yankee Stadium close in such a non-remarkable year for the team. See, I’m growing. I was glad that MLB brought the All-Star game there, and I made sure that my children knew who Derek Jeter was…that he was one of the greats, still playing. David was not in the room when I said this, and he rather loudly reinforced Jeter’s greatness when he had the opportunity. I said, “honey, I already told them that.” I suspect that he thought I may have told the children that anyone in pinstripes is the spawn of Satan.

…While I’m growing, I’m not all the way there yet. Here is a transcript of a recent conversation between my husband and I the week after Tom Brady went down:

Me: I can’t believe there are so many Brady-haters out there! People actually think that he has no ability and that Moss made the difference.

David, with a look of utter disbelief: What did you expect? He’s the A-Rod of the NFL.

Me, thinking this means he doesn’t produce in the postseason: NO, he’s NOT.

David: Sure he is!

David: No, I just mean he’s the pretty boy…he’s the one that people love to hate.

(perhaps he should find a different metaphor next time)

And since I have the opportunity, just one more picture of Jonathan:

Future Varitek? I could look at this picture all day and it would still make me laugh.