I’ve been meaning to post this update for oh, about two months now. Loyal readers will remember that in mid-October, David and I organized and promoted a concert here in Charlotte to benefit Jason and Shawnda’s adoption of Jeremiah.

The week leading up to the concert was a flurry of activity…contacting media outlets one more time, finalizing food details, and following up with the artists. I was so grateful for Erin’s help on Saturday…she and Ben watched the kids for about half the day and brought them to the concert, brought them back home, and put them to bed.

A couple things you should know:

A few favorite memories from that night:

Turning the corner to 36th St and seeing this… 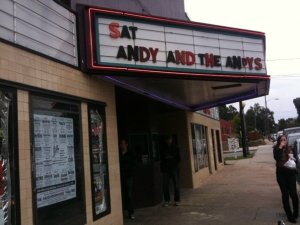 Turning a corner inside the Neighborhood Theatre and almost physically running into Andrew Peterson, who had his arms full of CD boxes. I didn’t even know that the band had arrived yet.

Giving directions to IKEA to Andrew Osenga so he could buy a piece of a cabinet for his wife, and then listening to the other Andys do soundcheck without him because he wasn’t back yet. Andy Gullahorn on electric guitar? A rare treat. If I weren’t so impressed at the Square Pegs’ ability to play every instrument in the entire world well, I’d be annoyed.

Laura’s cake…a stroke of genius. Here’s the picture it’s based off of…. 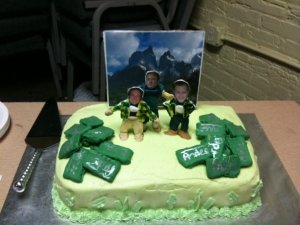 Seeing all three of the Andys taking a picture of the cake with their iPhones simultaneously.

Funny story…we got area restaurants The Penguin and Cabo Fish Taco to donate food for a pre-concert dinner for the band and some lucky guests. Despite my calls to confirm the week prior, BOTH RESTAURANTS FORGOT US. They came through in the end, though, and made good on their promises. Unfortunately the food the Penguin gave us was COLD. Not “cooled off,” but just-out-of-the-fridge COLD AS STONE. I guess they thought that we had an oven to work with? I ended up running up and down stairs, the length of the venue to a pint-sized microwave in the dressing room in order to have hot dinner to serve everyone.

Seeing Shawnda laughing in the front row with CHUBBY Jeremiah bouncing on her knee. I love that girl. 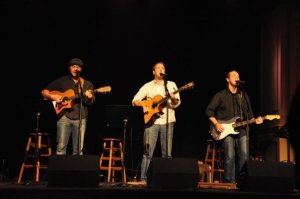 David and I sitting backstage during intermission and after the concert, getting to know these men better. I admire them and their music all the more since talking with them.

Knowing a young couple who had a sad child-related anniversary each October 17th came to the concert for a welcome distraction…and left having decided to adopt a child from Uganda. Um… ’cause that was the whole point.

Thanks to everyone of you who prayed, helped, and supported, and especially to those who came! It was a night of encouraging music, fun, laughter, and joy in our community in Charlotte.

One Response to “So, How Was the Concert?”