Here are my budding scholars on our first day (this past Monday).  You can see our school mascot’s head in the lower left-hand corner.

Everybody outside after lunch.  I love Jonathan and Maddie in this picture.  SO cute. 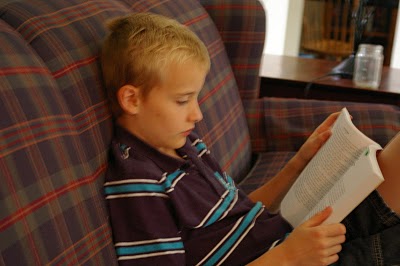 Cameron reading Trial and Triumph.
He reads most of his history and literature assignments himself now, and the transition has been very smooth for him.

Ben doing Math.  This year we’re trying out Teaching Textbooks, which is a computer-based program.  So far both Cam and Ben love it.

Jonathan doing Kindergarten math (Singapore Earlybird).  Jonathan is not quite five, so it’s a bit early to call him a kindergartner.  But he does love being alongside the rest of us, doing work.

Andrew doing first grade math (MEP).  His reading improved over the rest time we had this summer and he has shown himself to be a ready first grader.
One of the major skills in the early years of a Charlotte Mason education is narration — simply put, telling back what you just heard.  I read aloud to Jonathan and Andrew every day and they have to tell me what I said in their own words.  We start out with a paragraph or two at a time, then build up to a page or a whole Aesop’s fable.  I am impressed with their ability to narrate already.  Narration was a skill that I had to explain and teach to Cameron and Ben, but the younger two have seen it modeled so much that they have fallen into the habit naturally.